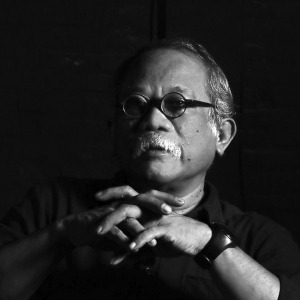 Rachman Sabur was born in Bandung, September 12, 1957 and now he teaches at ISBI Bandung, theatre major. He has directed Payung Hitam Theatre for 37 years with more than 100 performances under his direction. Some of his directorial works received praise, such as, Waiting for Godot (1991), Metateater (1991), Kaspar (1994) and Merah Bolong (1997). Rachman Sabur deconstructed text to a “destructive” level by changing the verbality of a text with body, groaning, squealing, and breathing sound compositions; cutting and colliding with several objects, violence, danger-defying pain, fiercely and uninhibitedly inflicting wound to oneself, such as presented in performances of Kaspar (1994) and Merah Bolong (1997). He often collaborated with international artists. Some of which are a three-country theatre collaboration between Indonesia, Philippines and Japan in Shibuya, Japan (1997); The Lunatics Theatre from the Netherlands for Oerol Festival and in Terschelling, Netherlands (2005), and also a collaboration with several artists in Taiwan Inka, Shirong in Migration Music Festival at Cloud Gate Theatre Taipei, Taiwan (2015). Besides performing in various countries, he’s often invited to present workshops. His latest body theatre work is Monotubuh Hantu Plastik (2018).